On International Women’s Day, I’ve got something to say about my little women!

(Well, truthfully, I started typing this Jan. 22nd, but since today seems appropriate to post it, here ya go!)

By now, yall know that our family temporarily grew this summer with my three nephews coming to live with us! If you missed it, read about it here!

I heard A LOT of comments regarding the whole situation in general. I could write a blog post a day about the things that were said to the kids and me throughout our time together. But I heard one comment more so than ever in those 9 weeks…”you finally got your boy, huh?!”

While the six-year-old had fair skin and red hair, and the three-year-old had blond hair and hazel eyes, the 15 month old, Gavin, had brown hair and brown eyes, just like me! You can see how different they each look in this pic:

And although I had all five of them a lot, ANY TIME it was Bella, Lilly, and Gavin, which it often was because Joshua would take the older two boys to do stuff, it never failed that AT LEAST one person (or 1723689) would say “What a beautiful family! You FINALLY got that boy, huh?!!!!” And before you say it, I hear ya, I’m sure people meant well. They’re trying to make conversation, right? They see two kids of the same gender, and then a younger kid with the opposite gender, and assume you must be thrilled/relieved/ebullient! And if Gavin was mine, of course, I’d be thrilled!!! But not because he’s a BOY; because he’s my CHILD.

Of course, these words didn’t come as a surprise to me because the minute we found out that our second (Lilly) was a girl, people already started asking if we were going to try for a third so we could “get that boy!!!” Let me repeat that. Before our second child had even been BORN, people were wondering if we would try again for a different gender?!!!! Right. Because just speaking “boy” into existence, guarantees us the next baby will have a wiener! UGH. And believe me, I also know that if we had two boys, people would ask if we were trying for a girl!

Here’s the thing, I knew I was always meant to be a mom of two. I told Joshua on our first date that I was “two and through” when it came to kids, no matter the genders.

So I would try to be funny, or change the convo, or even be truthful/polite at first, with my response being, “Joshua and I are having two kids, so no third baby, or possible boy for us!” Which would usually prompt the person to say, “Oh really? That’s such a shame. I’m SURE your husband wants a boy! You should at least TRY to give him one.” WHAT IN THE ACTUAL WHAT?! My favorite was a random woman on a street corner uptown who saw our family of four bike riding a few months ago and said, “you need to give that man a SON! We need to raise more male leaders in this country!” Yeah because that’s totally what’s lacking in #merica. Okaaaaaay.

YALL. STOP. LIKE, FULL STOP. If you are saying things like this to people, let me explain why it’s offensive/hurtful to some. (I say “some” because I know people are going to say it doesn’t bother them AT ALL to hear things like this. They are better people than me, clearly ;))

First, my reproductive decisions are none of your business. But since I’m an open book, that’s not even what bothers me the most about it. It’s the ASSUMPTION that people are disappointed with what genders their kids are, or that no one is happy until they get at least one of each. Joshua and I had ZERO expectations going into our pregnancies. I think (I struggle to remember anything) we were like, a boy and girl would be cool because we’d get to experience each gender, and its unique challenges and joys. I had a thought that if a boy was born first, he could be the big brother to the younger sibling. And as long as it took you to read those two sentences, is as long as we devoted time to thinking about it. But the second that ultrasound tech said, “IT’S A GIRL!” when we were finding out with our first, we were over the moon ECSTATIC to be having a daughter!

When we announced we were pregnant the second time, “are you hoping for a boy?!!!” was the most popular question. “Um, I truly don’t care if it’s a boy or a girl. If it’s a boy, we have a lot of stuff to buy, and I have to get comfortable with boy parts! If it’s a girl, we won’t need to buy as much, and I’m familiar with them already! It’s a win win!” Well, when the tech put the cold gel on my belly and saw another girl on the screen, we were once again elated!!! We were going to have SISTERS, and we couldn’t WAIT to see their bond. But I couldn’t figure out why if WE (the people who were actually RAISING THESE TWO GIRLS) were excited, other people had such strong, sometimes negative, opinions?!!! I mean, this isn’t China yall! We’ve progressed enough to know that girls are awesome too, right?! RIGHT?!

Fun fact: not every MAN judges his masculinity on whether or not he has a son. Not every father NEEDS a boy to carry on his name or legacy. Not every guy cares about generations of names, and having a “Junior.” My hubby was named after his father, and doesn’t even go by either the first or middle name! Not every dad is crushed if he doesn’t have a boy to “toss around the ball with,” because he can also toss them around with our minis. Please don’t pity Joshua; he doesn’t want it. And for the record, if we had a third, he’d want it to be a girl, so there 😉

But what REALLY chaps my ass about the “you finally got your boy?!!!!” comment, is when it’s in front of my two daughters, because you’ve given THEM the idea that a parent isn’t TRULY HAPPY, until they’ve birthed a son. Bella once said to me after hearing this for the umpteenth time this summer (and many times in the last eight years), “Mommy, I know you’ve said you are happy that Lilly and I were girls, so why does everyone think you and daddy wanted a boy?!” I could’ve gone in to some long explanation about how projection works, but instead, I just told her people don’t realize how things come across when they say them and how people typically mean no harm. I was mostly grateful that she heard what I had repeated to her and Lilly all those years.

“I love that I have two girls so much, and wouldn’t wish for anything else! You two girls were meant for daddy and me, and no one else!”

Because imagine if she heard all of those comments over the years and internalized them? ‘I’m just a girl.’ ‘I’m not as good as having a boy.’ ‘Are my parents disappointed in who and what I am?’ ‘Would I be better if I was a boy?’ ‘Does my dad wish I was different?’ And so on and so forth. Because isn’t that the message people are trying to insinuate? OHHHHHHH, it’s NOT?! Well, if it isn’t, then stop. Stop saying it. Because words matter. What our daughters and sons hear, matters. And yes, I realize that not every kid is going to be scarred by these words, but maybe a few will? And I KNOW no adult actually wants that, so let’s just say what we mean, and mean what we say?

And I know it happens the other way around with boy moms. “Oh geez! All boys?! Sheesh. You must have your hands FULL! Are you hoping for a girl, so you can feel what calm and sweetness is like?” As if boys aren’t capable of that?! As if girls aren’t ever rambunctious?! LOL!!!!

If you think having a boy is the best thing since sliced bread, AWESOME! But I also think the same thing about having a girl! I think it’s honestly, you love what you’ve been blessed with, no matter what, because it’s what you know! Both genders are equally as beautiful, and life changing, and miracles, etc.! But it doesn’t mean that person you’re talking to wants one or the other. It doesn’t mean, especially if they’ve told you they’re happy, that you should convince them otherwise. And it certainly doesn’t mean that you know better for their lives, than they do.

And please let me make myself clear. If you WANT to “keep going til you get that boy (or girl),” DO IT!!! Nothing wrong with that!!! My friend just had a baby girl after four boys, and I know she feels like her family is now complete. Three of my other friends had two boys each, and all had a daughter their third go ’round, and they feel an insane bond with their girls that can’t be described. But they felt like they were missing that piece of a dream; I simply don’t.

Also, if you are done having kids (for whatever reason), and didn’t get the gender you deep down wanted, or maybe always thought you’d have, I understand that too. I have a very good friend who has two awesome boys. She adores them. They lack for nothing in life, in every way. But deep down, she would’ve loved to have a daughter at some point. It was a wish she had her whole life. But that’s not what happened, and it’s okay to mourn the loss of a dream. So imagine how much hurt it caused, on top of what she was already feeling, to have people say “you’re not going to try for a daughter?!!!” Or “you would make SUCH a great girl mom too!” And so on. If she could have, she would have.

I wish we could just get to a place where everyone was happy for you, right as you are. Instead of telling you how much better it would be if it was different. I’m happy. My stud is happy. Our daughters are happy. You should be too, for us.

PS Because this post is about Gavin, and how he could be my son,
here are some fun pictures about how we’re similar in many ways! 😉 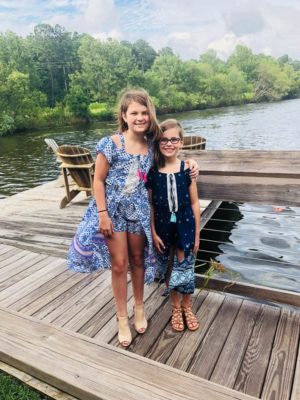 How to talk to your kids about periods and sex!