If you’ve missed it, I published THIS post recently about why we had guardianship of our nephews this summer, and then followed it up with THIS post (about a comment I heard often)! It’s a funny thing going from two kids to five kids, but not as much for me, as it was for random strangers I guess?! Because they were the ones who had the most comments, some incredibly rude! Before I get in to all of that, here was the age breakdown of the kids when they got here: 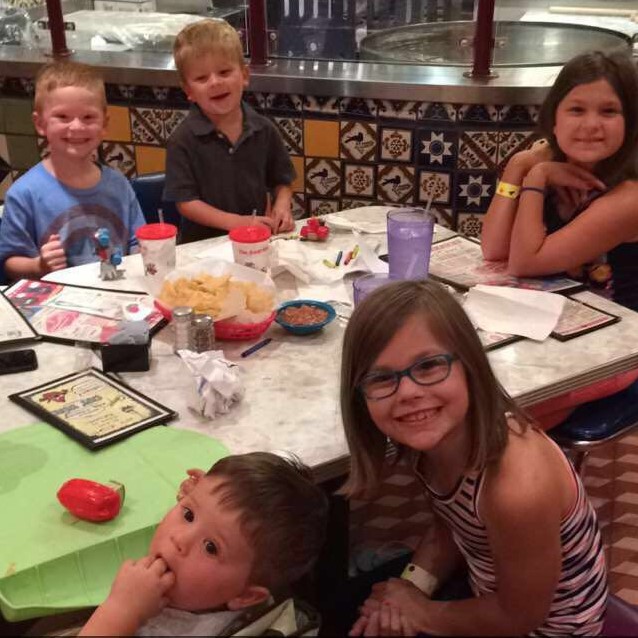 Now, I will say this. We have extremely easy daughters. If we didn’t, this probably would’ve been an absolute shit show to be honest. But luckily, our minis LOVE babies, babysitting, and a captive audience, which these boys certainly provided. I was coming off of closing my bakery, and a cake business that I had for almost ten years! So I gotta say, the idea of five little ones, under nine, for the summer, in our tiny condo, STILL didn’t scare me!!! Because the last ten years had been TRUE INSANITY. I figured, if I could put up with thousands of customers (and their personalities and sometimes outrageous demands, while having nonstop deadlines) I could handle a few extra kids. I was just looking forward to getting to see my minis during the day, without the stress of a job, for the first summer EVER!

My goal was to get out of the condo every single morning, weather permitting, that we could! I’m a big fan of doing a fun activity/outing in the morning, coming back for lunch, nap/quiet time, a before-dinner walk, dinner, bath, bed. And repeat. Every single day. If it was raining, or brutally hot, we would entertain ourselves with a dress up runway show, LEGOS, crafts, cooking, etc.at home!

But for the most part, I’d venture out with all five kiddos every morning, and the LOOKS I WOULD GET, YALL! Sometimes, they were sympathetic looks, like, ‘awe, look at that poor woman and all of those kids! She must be sooooooo stressed.’ Sometimes they were looks of disgust, like, ‘UGH. Can’t you just stop having kids?! Our planet doesn’t need more humans stealing all of the oxygen.’ Sometimes, they’d even go as far as to make comments, loudly, “Great! A daycare just walked in!”

And I know you’re thinking, ‘No, they would NOT say things like that!!!’ YES PEOPLE WOULD. YES PEOPLE DID. YES PEOPLE DO EVERY DAMN DAY. Just ask any parent who has, say, more than three kids.

Once, when Joshua was with me, a random guy felt the need to walk up to us, and said to him, “Man. Just tell her “no!” every once and a while!” referring to our sex life, while gesturing at me #awesome. These strangers, of course, didn’t know our story. They didn’t know that we were the guardians of three of these kids, and only two were “ours.” They didn’t know that the boys have two military parents who have six oversees tours between them. They didn’t know that the same people who protect their right to comment on our large family, entrusted us with these precious boys.

UNTIL, they would see how well-behaved these five kiddos were. Because let me tell you this, all five KNEW how to behave in public. They all knew what was expected OF, and FROM, them. If there was any acting up, we would leave. I’m not one to subject strangers to bad behavior, and I’m not one to reward kiddos by staying somewhere if they don’t deserve to. So when we would walk in, and I’d automatically hear people say stuff, or see them recoil in disgust, I’d want to scream, “AT LEAST GIVE US A DAMN CHANCE BEFORE YOU JUDGE US!!!”

But I didn’t. I just let the well-behaved kids speak for themselves, and before I knew it, those same people, who rolled their eyes and stared, would eventually come over to me, “Are they all YOURS?!!!” I’d explain the story to them, and suddenly, wouldn’t you know it…I was a SAINT?! “Oh my gosh. You’re watching all of the boys because their parents are in the military? You are a SUCH a good person. WOW! You are such a blessing to them!” And my favorite, “family is EV-ER-Y-THING!!!!”

Um, is it though home girl?! Because when you thought my FAMILY consisted of five kids birthed by me, you thought I was irresponsible, greedy, didn’t know how birth control worked, in over my head, etc. But now…NOW…you think I’m a hero for taking them all in. And subsequently, taking them all out (of the house)! 🙂 You judged us before you knew anything about us. Which begs the question I asked myself over and over…

WHY DOES IT MATTER TO YOU HOW MANY KIDS A PERSON HAS?!

Seriously, why? As long as they aren’t affecting you in some way, why does the idea of a big family seem to bother people? And please, let me make sure to reiterate, I understand the curiosity! I also understand that some people were trying to be funny in some of their comments. I also ‘get’ that anything beyond the societal “norm” of 2.4 kids, will evoke questions and stares, but I will never understand the rude comments, and the bad behavior assumption.

In the not so distant past, having five children wasn’t considered to be SO MANY EFFING KIDS! But that doesn’t even really matter to me. What matters is that people respect what other people choose to do with their lives when it comes to having a specific number of kids. I’ll tell you this, I loved having five kids! My hands were full, but so was my heart. I was covered in hugs and kisses, and it was fun to have the boys! Sure, there was pee EVERYWHERE! But that was a small price to pay to have so many little ones to laugh at my jokes 😉 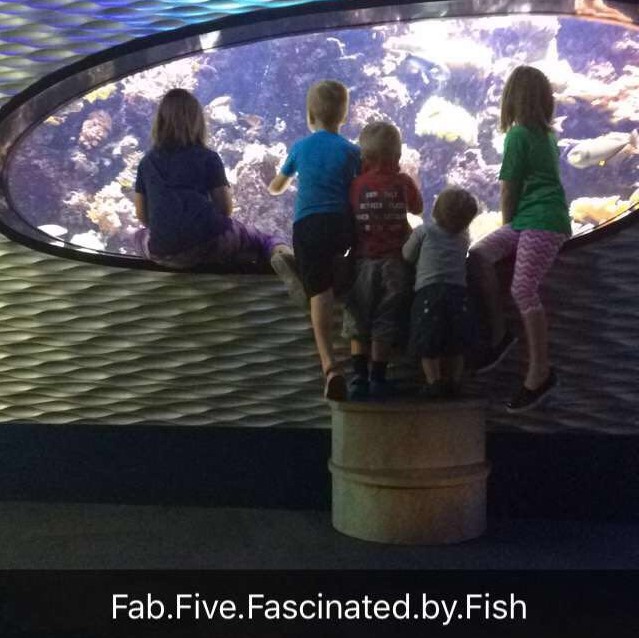 Just because the thought of five kids would overwhelm YOU, doesn’t mean that it sounds awful to someone else. That’s called projection folks, and you gotta stop that shizz.

My favorite story took place at our favorite Mexican restaurant, Azteca. I walked in with all five kids, and we were sat at a table. Joshua was coming from work, so I was there were without him for a few minutes. I sat all of the kids, making sure they all had chips, salsa, their waters, etc. and they were all perfectly quiet and happy.

A group of eight people, maybe in ages ranging from 55-70, came towards where we were seated, and I met their faces. I could tell in their comments and mannerisms that they assumed the five kids would ruin their adult-filled evening, and heard them even ask the hostess if they could be seated somewhere else, but it was the only available eight-top and they begrudgingly took their seats. Joshua showed up shortly after, and I filled him in on the rolled eyes, the looks in our direction followed by heavy sighs, and told him that they were none-to-pleased to be seated next to us. As usual, the kids were PERFECTION the entire way through dinner, and were adorable with the mariachi band, the waitress, and anyone else who talked to them.

When our meal was over, I was busy wiping the kids’ faces and hands, and Joshua got up to pull the car around. The table of eight stopped him, and I heard a woman say, “I just wanted to say what a fabulous job you two are doing with those kiddos.” Joshua told her that we had our hands full, but that we loved it. The rest of her table made some kind comments and some of the kids followed Joshua out. Then she leaned over towards me, and said, “I will be honest, I didn’t want to sit here at first because I thought it was going to be disruptive. But I was shocked at just how great they all were.” I told her the story of why we had five kids, and she REALLY couldn’t stop with the compliments then.

I told her that I could sense when people were bothered by us, and kindly mentioned that I’d appreciate the benefit of the doubt every once and while, but that I certainly understood why people were curious. When I was ready to take the last few kids to the car, her entire table clapped for me, and made sure to say “good job” to the kids. I got choked up and thanked them for the gestures.

And as much as I desperately wanted to get the benefit of the doubt, I wanted the KIDS to get the benefit of the doubt from people more so than anything. I’m a huge believer that if you expect kids to be bad, you’ll look for every instance for them to be bad. Maybe try expecting the best from them, and they just might rise to the occasion?! This is why I don’t love the terms “terrible two,” “threenager,” “frightening fours,” etc. It’s almost a predetermined ‘this is when my kid (or other kids) is going to start sucking.’ Well folks, I’m here to tell you, THEY DON’T HAVE TO. But that’s a whole ‘nother post!

Bottom line, I’m no hero. John and Joy are the heroes of this story. We simply filled a role that was needed (and that we signed up for many years ago BTW), and I craved people’s support more than ever. Not their misplaced judgments. So think about that before you decide to know the story of the large family you see walk in somewhere. Perhaps they’ve adopted children from a bad home situation? Maybe there’s been a death in their family/friends circle, and they took in the children left behind? Or guess what?! Some people LOVE the idea of a big family, and can choose to have as many as they want!!! My dad is one of nine, and my mom is one of seven. It’s not weird to everyone, I promise! If you’re wondering how to react to a family with lots of kids…show love, grace, and kindness (like you should to everyone else BTW).

Oh, and could ya hold the door for the woman with the double stroller, a diaper bag, purse, and a bajillion kids?! Kthanks. 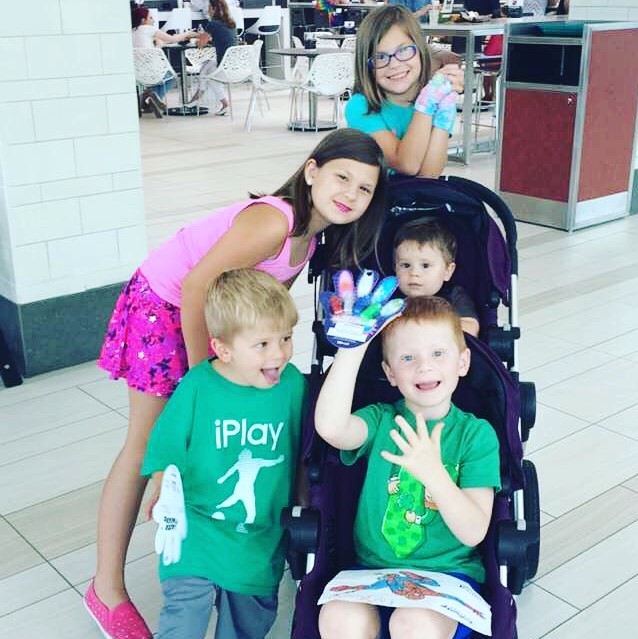 That time we went from two kids to five…overnight! 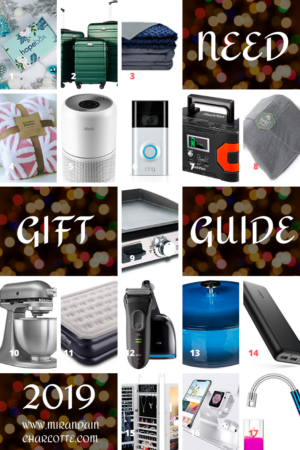 Need Gift Guide All from Amazon 2019