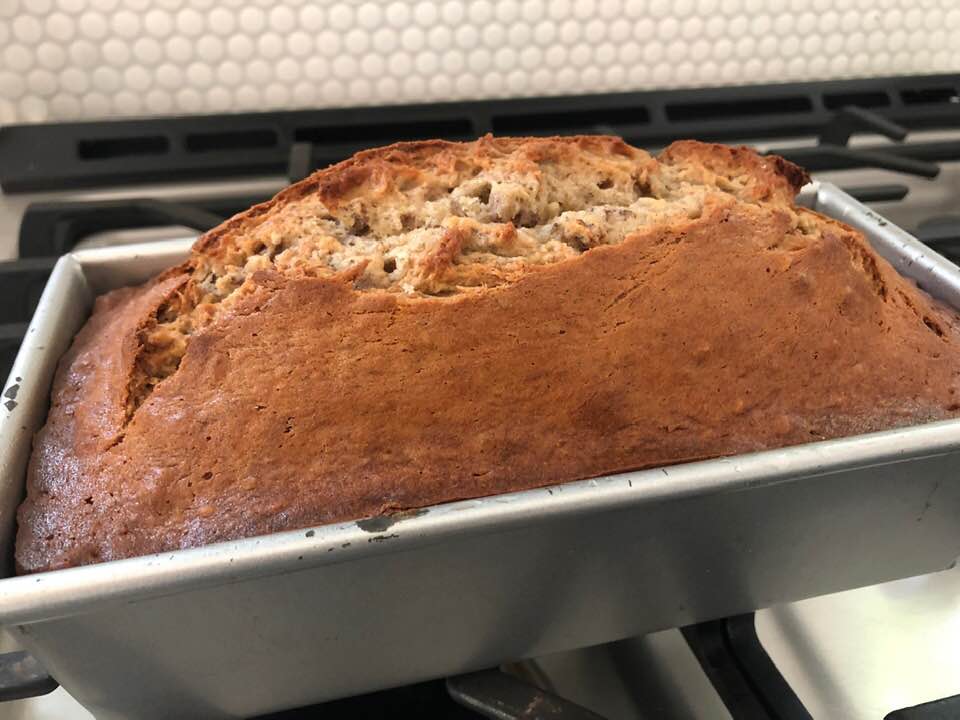 Are there certain dishes that you just want to MASTER?!

Something that will be talked about long after you’re long gone, handed down from generation to generation?!

Well, I think I found that in this banana bread recipe!!!

It’s the perfect combination of fluffy and not greasy (because the fat is butter, not oil), with warmth from the cinnamon and crunch from the pecans! If you like Starbucks’s banana bread, I think you’ll love this even more! Of course, you can leave out the nuts, but I’d still add the almond extract for the nutty flavor. 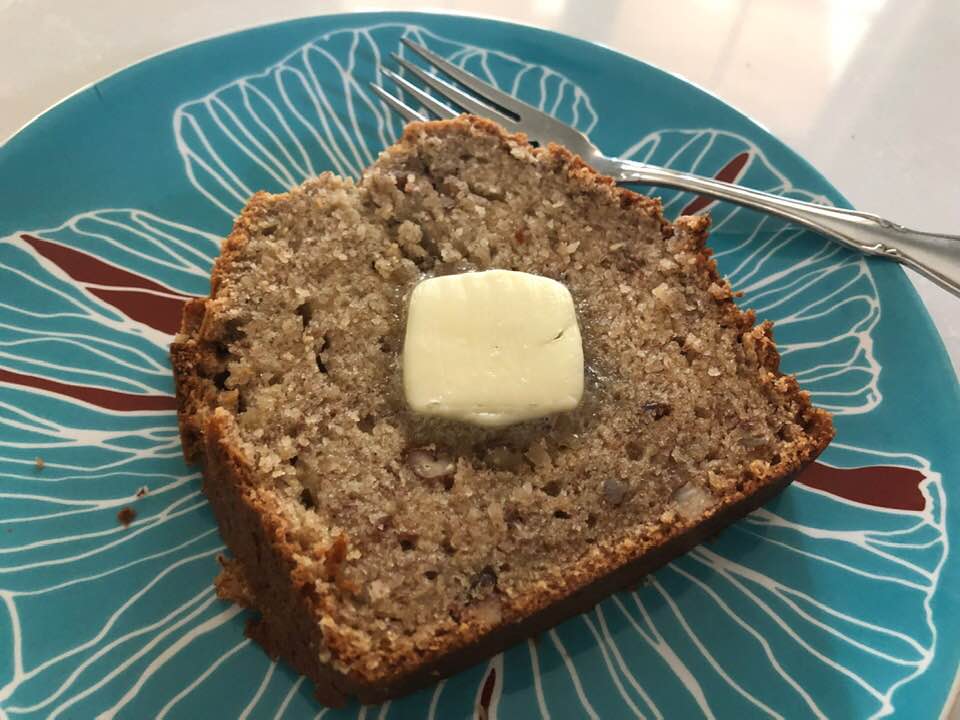 And I’m going to share it with yall because I think everyone should have a fool-proof bread recipe of some sort, and since my bananas are always on the verge of going “bad,” I make this A LOT and have perfected it IMHO 😉 And may I just kindly suggest this? When trying a recipe for the very first time, try to make it as written, and don’t alter it (I’m not talking about allergies, obvi)! Unless you just absolutely DESPISE nuts, but I’d suggest toasting them before you write them off, as that makes all of the difference! Also, this isn’t the time for low calorie baking…just enjoy the indulgence! 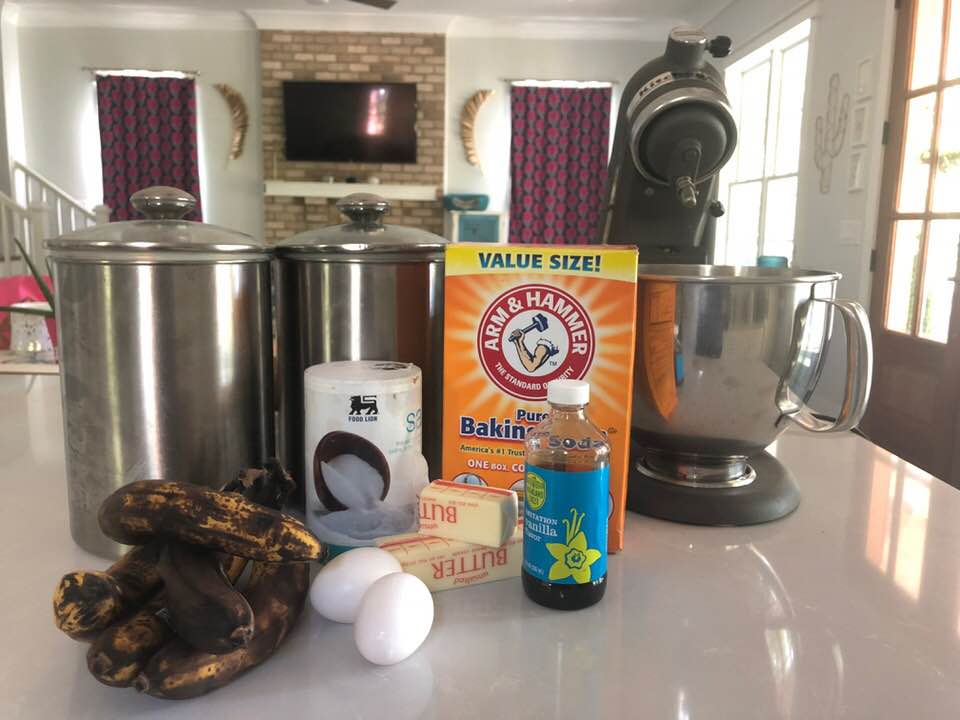 And I have so many tidbits of information in the NOTES section of the recipe (including gluten free substitutions, etc.)! If you have a question, I’d almost bet that the answer is in there! So make sure to read the recipe AND the notes, and then if you still have one, leave a comment with it, and I’ll get right to it! 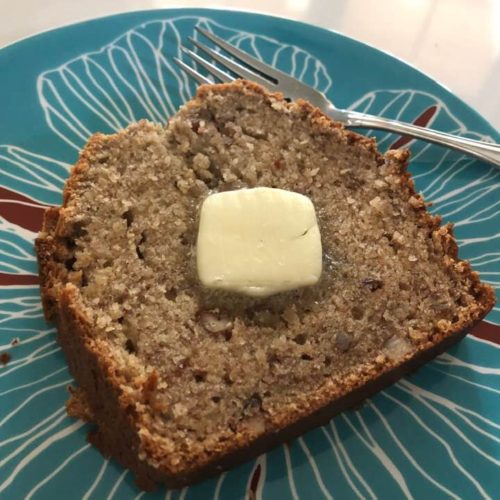 Here are some answers to FAQs: ~Bananas need to be RIPE! They need to be mostly brown on the outside for the best banana bread because they'll have the most flavor! I have heard you can roast bananas in the oven to make them ripe (look it up), but I've never tried it myself.
~If you're gluten free, I've heard Bob's Red Mill 1 for 1 gluten free flour works as a flour substitution! I don't know about any other substitutions for sugar, dairy, etc. as I've never tried them. I'm sure there are tons of recipes on Pinterest/google with specific ingredient substitutions if you want to find them! And I'm sure those bakers/recipe creators would love the support too!
~Make sure the banana bread is all the way done before you remove it from the oven, and don't worry if the bread is brown on top! It's just the sugar in the batter crystalizing and think of it like crust on regular bread...it's darker too, yall!
~Oh, and yes, sweet cream butter is the same as butter. Fun fact: butter is just cream beaten until it's hardened, hence the name "sweet cream butter." Speaking of butter, if you only have salted butter, that's fine, use it, but omit the salt in the recipe. But the reason we use unsalted butter in recipes is because then we can control how much salt we DO use in the recipe!
~Bread doesn't need to be refrigerated afterwards, but I keep mine in the loaf pan and just cover it with aluminum foil once it's completely cooled! If you cover it while it's still hot or warm, you'll just steam it, and that's not good!
~You can use frozen bananas, although I never do. If you do use them, fully thaw them, and pat any condensation off of them with a paper towel before using them, or you'll have too much liquid.
Keyword banana, banana bread

But let’s discuss pans for a hot second #punintended! I think the right pan makes all of the difference in baking, and the loaf pan is no exception! I’ve linked my favorite one in the Baking tab of my Amazon store found HERE! There are more of my favorite kitchen finds in that store too, but if you want to bypass the store, here is the direct Amazon link!

Disclaimer: When you purchase through my affiliate link, at NO additional cost to you, I make a very small commission. Your purchases help keep me writing, sharing, and creating content for yall! Thank you!

So there you have it folks! My favorite banana bread recipe of all time, and I’ve tried A LOT of them! And you MUST put a pat of salted butter on your slice!

If you have any questions, let me know, and I’ll make sure to answer them! Also, PLEASE PIN the image below to one of your Pinterest boards! I’d be so grateful!! If you want to follow me on Pinterest, here is my page, Miranda in Charlotte!

My staycation at The Dunhill was packed with perfection!

Cake Decorating with a SPOON?!

How Barry Manilow named me.